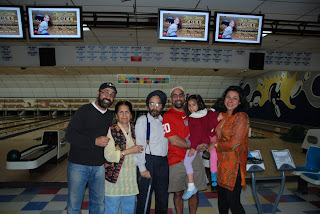 As I've said before, My Fabulous 40th Birthday isn't a monologue, it's a collective celebration of turning 40. And at least in my world, people are turning 40 every day in every which way. Just this week, I received an invitation from a new acquaintance to "party like it's 1970," heard from an old high school friend celebrating his 40th on the beach in Bali, and received this email from my college buddy, Sarbjit.

I first met Sarbjit when we were college freshmen. He asked if I'd come to his dorm room to help braid his long hair so he could tuck it into a turban, or more likely, a baseball cap. His mom had always done it up until then and he didn't know how. I bet he asked all the girls to do that. Nice try, Sab!

Anyhow, braiding led to friendship - one that has lasted 22 years to-date. Sab, a blogger in his own right, Sports Doing Good, offered up this lovely contribution to our collective 40th Birthday Celebration. I give you:

April 11. My 40th birthday. Not something I was especially excited about but neither was it something I dreaded. Birthday are old hat at this point. I don’t think about my age much. Just sort of have a feeling about it.

But over the past 2 to 3 years, my birthday has taken on a new meaning because it is now another time for me to “party” with my nieces. Well, how do you party with the pre-5 year old set? You do what they like to do (what they consider “new school”, even if they don’t know what that term means). And if you are lucky, it is what you liked to do when you were that young. (old school baby!). And for my 40th, we found common ground…we went bowling.

My old school birthday entailed hitting the bowling alley in my hometown of Rockville Centre, NY. The bowling alley has been around for more than 30 years, which I find really comforting living in a world in which so much is new, with so much turnover that is not always for the best.

The bowling party entailed my parents (the older set), me, my brother and his wife (the not-so old set), and the girls (the newbies). We all took a shot at the old game of bowling, which has a decidedly new feel to it, with electronic scoring, fancy graphics, and a more polished environment.

The older sets laughed about how long it has been since we were in a bowling alley, how much fun it was, and then rejoiced in the wide smiles we saw on the girls’ faces after each new ball was rolled.

We had a great day, this celebration of the 40th year since my birth. April 11, 1970 launched a period of newness. And while some of the “new” has become (relatively) old, I am thrilled that the two newest people in my life who I love very much see that “old” as being new. And that feeling will never get old.
Posted by Kris Connell at 4:50 PM No comments: Links to this post

In honor of Cinco de Mayo...okay, I know it's now almost Diez de Mayo, but I got busy...how about a Fabulous 40th Fiesta?

I think for a lot of people, it starts with the Margaritas.

Margaritas are not my favorite, I prefer Mexican beer. I even like it in a can. A lot.

Empanadas are a filling option if you want to make this a cocktail party only. 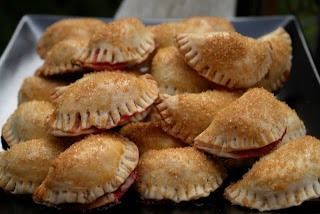 And tequila shots are always an option. One that I opt out of ALWAYS. I assure you, if I opted in, it would not end well.

Why not get a Mariachi band?

And decorate with Papel Picados... 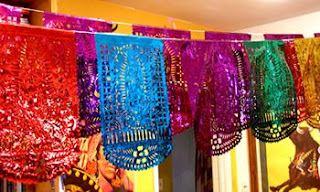 And a great Pinata...

Now that's a Fabulous 40th Fiesta!
Posted by Kris Connell at 10:46 PM No comments: Links to this post