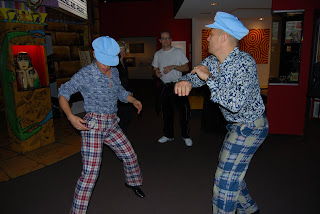 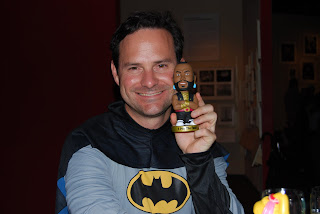 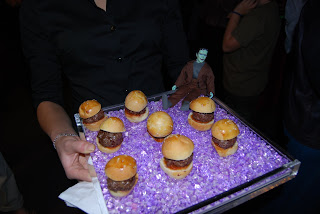 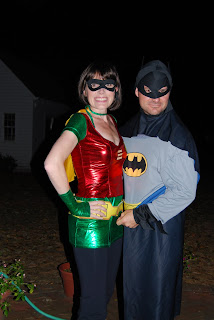 Just around this time last year, my most creative friend, L., threw a 40th birthday bash for her husband - a costume party with a twist.

The invitation looked like the striped TV screen you used to see during "this is a test of the emergency broadcast system." Guests were invited to celebrate her husband's two favorite things - his friends and television -- and to please come dressed as their favorite television character from the past 40 years!

The party was held at The Museum of the Moving Image, amidst tons of television memorabilia. Specialty cocktails -- "the Isaac Washington," "the CJ Cregg" and the like -- were served by waiters upon arrival. Hors d'ouevres were served on lucite trays with tiny figurines of famous TV characters like Herman Munster and Marcia Brady perched in the corner. Everyone was invited to use the museum's "make-your-own-flip-book" exhibit, with flip books delivered during dinner. Dinner itself was TV dinner comfort food, and the table featured fantastic TV character bobbleheads doubling as decor and favors.

And the costumes! We went to Ricky's costume shop the day AFTER Halloween and were lucky to find anything at all - the place was a disaster. But we walked away with Batman and Robin costumes. I liked mine, but my husband found the Batman costume a bit uncomfortable ("like wearing a thong.") Costumes included Laverne and Shirley, Lou Grant and Mary Richards, Heidi Klum and Tim Gunn, the cast of MASH, Christopher and Adrianna, and my absolute favorite -- Two Wild and Crazy Guys from Saturday Night Live.

It was a fabulous 40th birthday!
Posted by Kris Connell at 7:32 PM 3 comments: Links to this post 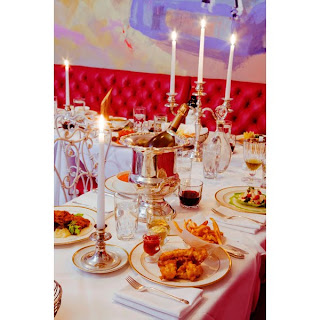 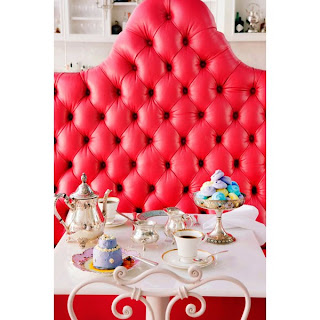 Last night, we had a sweet celebration at Sweetiepie (http://www.sweetiepierestaurant.com/). This is a wonderful, fanciful restaurant that opened in Greenwich Village late last year. It's the perfect place for kids and grown-ups to enjoy together. We sat in the birdcage (see the picture below), complete with a candelabra and crayons in a silver dish for the girls. I'm not sure there's anyplace else that you can enjoy a glass of champagne and a ladies' lunch-type of salad while the kids enjoy spaghetti & meatballs or a hamburger, both of which got the nod from my picky crew. And of course, we all saved room for what Sweetiepie does best...dessert!

This would be a terrific spot for a 40th birthday party! You can have a private party for 40 in the back room, or use the whole space for a cocktail party for 100. A real gem. 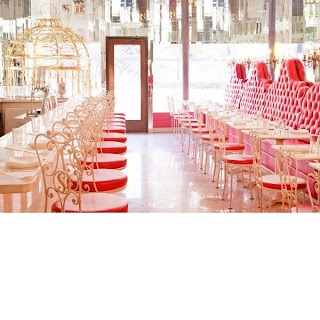 Posted by Kris Connell at 9:54 AM No comments: Links to this post

Email ThisBlogThis!Share to TwitterShare to FacebookShare to Pinterest
Labels: places to celebrate

Today is my 39th birthday - and with the exception of being on week six of a cough/cold combo and stubbing my toe rather spectacularly this morning -- I couldn't be happier.

Facebook http://www.facebook.com definitely makes for better birthdays. By 9 o'clock this morning I had at least forty fabulous birthday wishes. I love it!

I also decided to take the day off -- I did it last year too and I've gotta tell you it beats cupcakes in the conference room, hands down. Not that I didn't appreciate the cupcakes, it's just so forced - "um, could you come into the conference room? Mary needs you for a minute..." "Surprise!" (although for the person reading this who gave me cupcakes yesterday, you did it in a very laid back way and I loved it.)

It's a rainy day, my favorite kind for staying home and puttering. I don't know about you, but I find that I am rarely alone in my own home...and I'm so happy! I'm hoping to finally recover from this cough/cold.

I had a dream last night that my college friends and I went to Greece for our collective 40th birthdays. I was standing on a chaise lounge yelling, "I love Greece!" when a piece of feta cheese slipped out of my hands into the pool. Dreams are weird, but telling. My friends and I are trying to decide on a trip to celebrate our birthdays together. Have any great ideas?
Posted by Kris Connell at 9:38 AM No comments: Links to this post